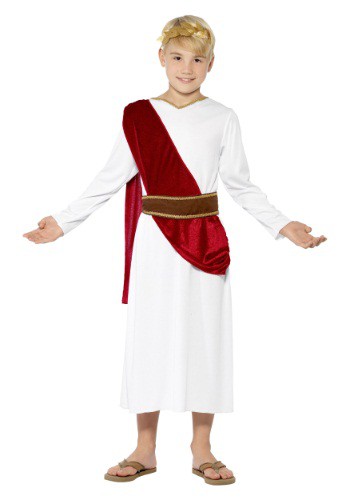 When in RomeIf your kid is anything like us, they dream of far off places and times. Pharaohs and impressive pyramids? Definitely. Great walls and karate? Of course. The rise of civilization in the west and the Roman Empire? Always. We weren't kidding about that last one. We can't tell you what big Roman empire buffs we are. We love the roads, the money, the weird pantheon of gods (pretty much stolen straight from the Greeks, of course) and the birth of the republic. Add to that some fabulous architecture and the scenic slopes of Italy and... well. We wish we had a time machine. But we don't. Not from a lack of trying, mind you, but it seems that every machine we track down is either broken or a fake. We've resigned ourselves to dressing up and throwing historical parties instead. Not as good, of course, but certainly an enjoyable time. Fun DetailsWe have such a good time, that we want to make available all our fabulous historical costumes to the world (so the world can party-down too). This, of course, includes any youngsters you know who are also buffs of the Roman Empire.  And if they are? Well, maybe they need this Child's Roman Boy Costume. This polyester outfit comes with a white robe with elastic waistband in back and velcro fastener. The red velvet sash is sewn to the front of the robe and drapes over the shoulder. There's also a belt waist tie and gold fabric headband that looks like a set of leaves. In this outfit, your young history buff will be ready for any party of the ancient-civilization style. Historically AwesomeAlso, when it comes to the costumes, don't worry too much about historical inaccuracies. Most people won't know the difference. The point is to have fun. Enjoy yourselves. Party like it's 14 A.D.!

Here are some other products related to Child's Roman Boy Costume