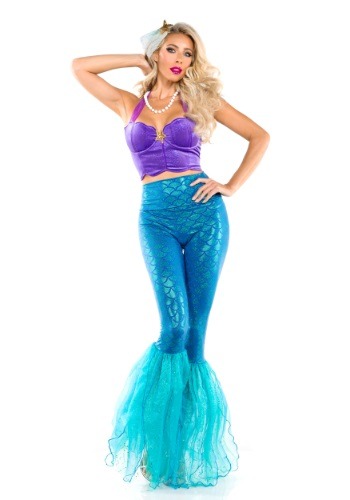 Fake It 'til You Mer-make ItRemember that documentary that came out a few years ago? It was totally fake, but it was so well done we actually thought they had found mermaids somewhere along the whale mating routes of  the Pacific Ocean. Remember it? Our whole office stayed up all night after our Thanksgiving party to watch it. Oh, you knew it was just a movie the whole time? Well, you know what, we were so disappointed when we found out it was fake that we immediately set about getting this Women’s Fantasy Mermaid Costume out into the world. Now you--yes you!--can help us by picking up this costume and helping us believe, just for a moment, that mermaids are, in fact, real.  Or, you know, you could also just enjoy how cool this costume is. Seriously, you’ll look like you just came from the depths of the ocean, ready to talk about the dangers of the Pacific Garbage Patch or the linguistic subtleties of dolphinese. You’ll just have to watch out for people who saw the same documentary we did and still believe it was real.Fun DetailsRegardless, you’ll love the all-over fish-scale print of these pants (it would be difficult to get around with an actual fishtail), accented with flared, layered organdy ruffles that imitate actual tail fins. Meanwhile, the top has scalloped edges and sequined medallions in the front, as well as a constructed bust with underwire support. Finally, attach the sequined hair ornament to complete the look, and become the mermaid of your dreams. Into the WaterWhether you do it for our sake, or because you love the idea of real-life mermaids just as much as we do, this costume will have you smiling like a clownfish (they smile, right? We don’t know much about sea life...aside from mermaids). Mermaids may not be real, but when you're rocking this costume, we can all pretend--even just for a little bit--that magic is real, despite whatever fake documentaries may ultimately reveal.

Here are some other products related to Fantasy Mermaid Women's Costume