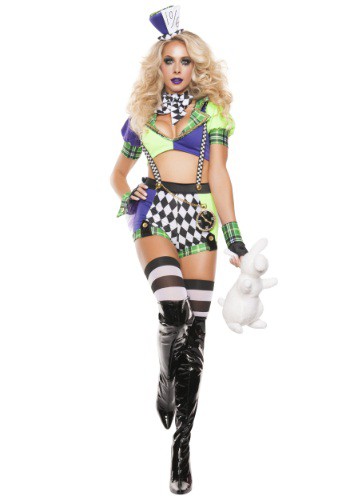 Wonderland’s Best and BrightestTsk Tsk Tsk...everyone thinks the Queen of Hearts is the only one in Wonderland who has any fun. But that’s not true. Not one little bit. You know that of all the zany, imaginative characters, no one can compare to the Mad Hatter. And what makes the Hatter so enthralling? Why, you never know what they’ll do at any given moment!Hey, that sounds kind of like you! You’re a gal who loves to surprise and delight, and who’s willing to go to great lengths to stand out from the crowd. As the ole’ saying goes: Even if you’re stuck at teatime for eternity, it doesn’t mean you can’t have a little flirty fun! That’s a saying, right? No? Well, you seem to be living it, so we’re going to try to make it stick. You’ll look so brazen and brilliant in this Women's Tipsy Mad Hatter Costume that the Red Queen herself may even invite you to be a part of her royal court. Of course, being the most popular and fun gal in Wonderland, you’ll just have to see if you can pencil her in!Fun DetailsThis daring look is “mad” in the best of ways—it’s totally bold and unpredictable, just like you! It features a pullover midriff top over matching form-fitting shorts with embroidered clock detailing. You’ll love the snap of the ribbon suspenders when trying to get someone’s attention. So attach your necktie, slip on these wrist cuffs, and tip your tantalizing little top hat at the next guest who arrives. They have come to see you, no doubt, and check out your truly original style!“Mad” About You (in this costume)Well, we’ll say it only once (for fear of being found out): You’re just so much cooler and more fun than the Queen of Hearts, and this look proves it! You’re obviously the true starlet of Wonderland, so go out there and work your mad magic.