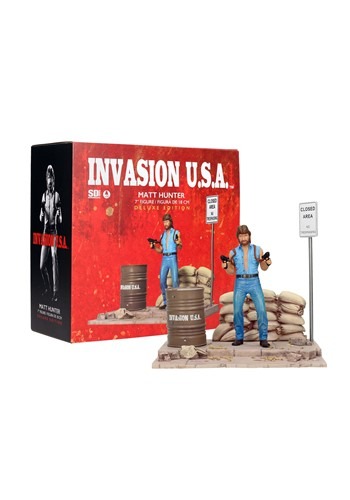 10 Surprising Facts About Chuck Norris1. Chuck Norris's tears cure all diseases. Too bad he has never cried.2. Every year, Chuck Norris sends in a picture of himself to the IRS. He's never had to pay taxes.3. A cobra bit Chuck Norris once. After a few excruciating days, the cobra died.4. Chuck Norris makes onions cry.5. The chief export of Chuck Norris is pain.6. Chuck Norris does not hunt. That word implies the chance fo failure. Chuck Norris goes killing.7. The quickest way to a man's heart is Chuck Norris' fist.8. Chuck Norris CAN touch MC Hammer.9. Chuck Norris has successfully divided by zero.10. Chuck Norris never wears a watch. He decides what time it is.Fun DetailsNow that you know a little more about the legendary Chuck Norris, you are officially qualified to own this Matt Hunter Invasion U.S.A. Action Figure with Diorama base. The figure does a great job at capturing Chuck's likeness from the 1985 movie, Invasion U.S.A. He comes with a display base that has a drum and sandbags. The figure is made of sturdy PVC material and measures approximately 7 inches. Set him on your desk and he'll ward off bad guys for miles.