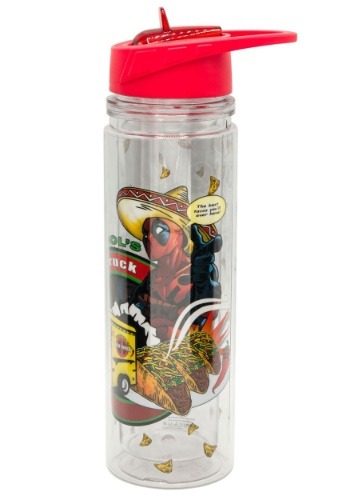 It's Time to Make the ChimichangasHow are tacos related to chimichangas? Like, is the taco the chimichanga's simple cousin from the country? Or maybe the chimichanga is like the taco's loud little brother, who's always trying to tag along to the cool parties. Does chimichanga go to taco's birthday celebration? Well, we know that Deadpool is a fan of the taco family. He proudly proclaims his love for chimichangas and tacos in the comic books and movies. And, quite frankly, you should give them a chance too! In fact, perhaps you should show your love of tacos (and Deadpool) with something like this Tritan water bottle.Fun DetailsThis officially licensed Deadpool Taco bottle has a double walled construction, which helps keep your water nice and cold. It's made of Tritan material, which is a BPA free plastic used for the best plastic water bottles. It also has the image of Deadpool wearing a sombrero on the front and guess what! There's a row of delicious looking tacos next to him. It also has a taco truck on the front, making it officially the best water bottle that has ever existed.Mystery SolvedOkay, so maybe we didn't solve the mystery of exactly how tacos are related. We did, however, help you solve the mystery of what bottle you should use for your water. And that's priceless!