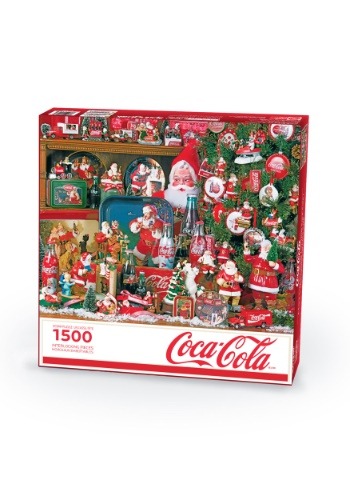 Red velvet RefreshmentBelieve it or not, flying through the winter night sky can be exhausting work! Santa Claus might start off a little chilly when he jumps into his sleigh full of toys but by the time he's squeezed down a few chimneys, his cheeks are red from more than just good cheer! The night air might be cold but it's also dry and all people are offering him, house after house, is milk. This is a guy who could really use a cold, caffeinated bottle of Coke. So he was pretty thankful when Coca-Cola started their Christmas themed advertising campaign. Ever since Coca-Cola has been using Santa as a wintertime mascot, he's been delighted to find ice-cold bubbly beverages that are ready to help him move on to the next house of a good boy or girl. Fun DetailsThe whole family will love putting together this officially licensed puzzle during the holidays. While this puzzle is at an adult difficulty level, kids at Christmas time can keep occupied with the picture, counting all the holly jolly Santas hidden within. A tribute to the many decades the Coke has used the mascot of Christmas joy as a figurehead, this colorful puzzle doubles as both an activity and holiday decor. Just goes to show you can count on a classic!