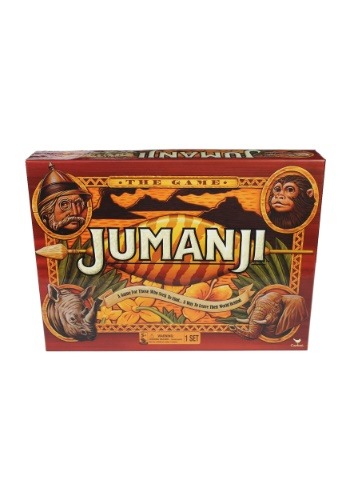 WAIT, DO YOU HEAR DRUMS? Prowling lions, wild stampedes, and a hostile big-game hunter tracking your every move is only a die roll away, as long as your adventurous enough to sit down and play Jumanji. Could extra-large spiders and poisonous plants invade your home? No, this board game isn't quite as immersive as the infamous game you've witnessed on the silver screen but it does supply endless fun. Don't worry, there's no risk of turning into a monkey but getting trapped in the Doomsday Grid could mean that you'll never get out to win the game. If your fellow players don't rescue you in time, then tell Alan Parrish we say what's up because you'll be spending tons of time with them. (We kid! We kid! You won't get stuck in Jumanji but you will be the loser of the game...) FUN DETAILSThe officially licensed Jumanji Game comes with 4 different wooden pawns. Pick your pawn then roll the eight-sided die to enter the world of Jumanji and move through the jungle! Draw a danger card then use the decoder to reveal a secret message. If a disaster should arise and you end up in the Doomsday Grid, you better hope your friends get there in time to rescue you!  YOU'LL GET SUCKED INFiguratively speaking, of course! If you're the winner, remember to yell Jumanji!

Here are some other products related to Jumanji Game