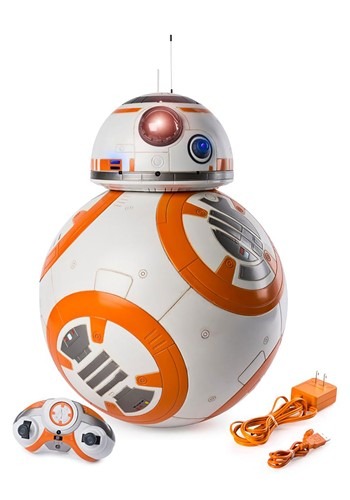 You've trained for months to learn the fight moves made famous by Rey. Now you can have your own droid companion just like she did with this official Star Wars BB-8 Lifesize R/C. Building your replica of the Millennium Falcon is probably going to take awhile but at least you'll have this little guy by your side! Just make sure the robot has been charged, take the remote controller, and use the buttons to make the little guy follow you around. Your dog might get a little jealous, but besides that, there are no downfalls. Are you already thinking of all the fun adventures you and BB-8 can go on in the future? Star Wars fans will love the chirping noises the R/C makes once it locates you. Other charming features include its round ball of a body, half sphere head, and its uncanny resemblance to its cinematic counterpart. Last but not least, if you muster up your best Han Solo impersonation (channel your inner Harrison Ford) and say Move, ball in a gruff voice, the courageous droid glumly rolls away. Although that may be easier said than done once you see this endearing lifesize R/C in person!