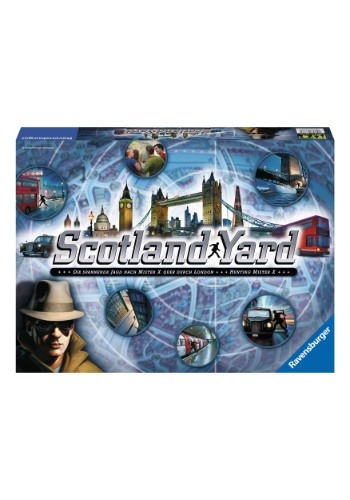 The Crimes of Mr. XThat dastardly Mr. X is at it again. His crime sprees know no bounds. Last week he robbed the bank. Then, he stole a priceless artifact from the museum. It’s time to end his heinous crime spree! It’s your job to catch the villainous character in the act and send him to jail where he belongs!The Scotland Yard board game plays 3 to 6 players and puts you and your friends into the role of investigators looking to catch Mr. X. One lucky player gets to take the role of Mr. X, using their wits to craftily escape the clutches of London’s finest detectives.Fun DetailsThe game comes with everything you need to play the game! It comes with a game board that depicts the cityscape, including various streets and neighborhoods from London. The player playing Mr. X must secretly plot a course back to his hideout as quickly as possible, using Taxi cabs, the bus, or underground passages. The detectives must investigate the area, trying to find clues to the whereabouts of Mr. X’s hideout. If the detectives can figure out where Mr. X is heading and trap him, they win! If Mr. X is able to make it to his hideout, he wins!Elementary, My Dear Watson!Scotland Yard is a clever game that gives players a chance to use their deductive reasoning skills, like Sherlock Holmes himself!