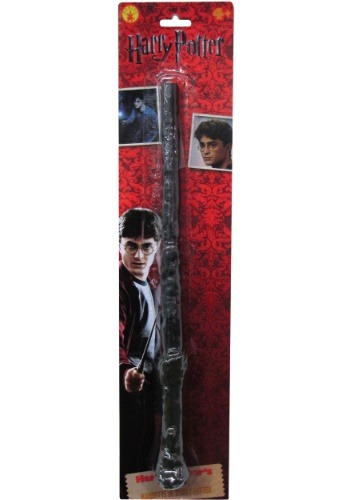 By the BookA wand is the object through which a witch or wizard channels his or her magic. It is made from wood and has a magical substance at its core. Wands made by Ollivander have cores of phoenix feather, unicorn hair or dragon heartstring, and are of varying woods, lengths, and flexibilities.Fun DetailsOur officially licensed Harry Potter Wizard Wand is a movie replica of Harry Potter’s signature spell casting stick, which in the books was made from an unusual combination of holly with a phoenix feather core. Ours is made from slightly more affordable (and existent) materials, so you’ll have a great accessory for your costume without blowing all your Sickles and Galleons.The Key to some serious skillsYou don’t need a wand to cast a spell in the Harry Potter universe, but you would be well advised to channel your magic through one than learn the complexities of wandless magic. That’s what Garrick Ollivander would tell you, at least, and it’s not like he has an ulterior motive for you buying a wand except that he wants to sell you one. It may seem a little strange, owning a quasi-sentient device just to cast magic with, but wands seem pretty complicit in their sole reason for being. What would it look like when your wand chooses you?

Here are some other products related to Harry Potter Wizard Wand