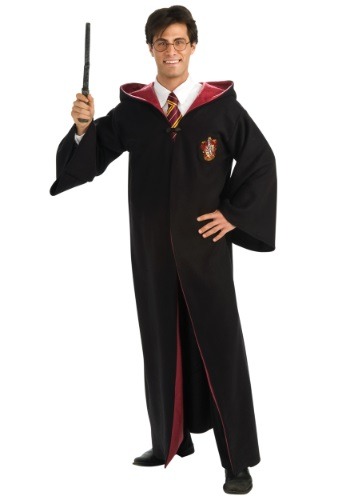 News FlashBeing Muggle-born doesn’t make you any less of a wizard (unless you’re Draco Malfoy, and then you have bigger problems on your plate, trust us).Now, yes, there are usually procedures by which muggle-born wizards are selected to join the magical world, but we...uh...bypassed them a bit, and enchanted this Men’s Deluxe Harry Potter Costume to take the wearer straight to Hogwarts without so much as a stop to Diagon Alley. Wicked, right? So, the good news is that with the help of this costume, just because you were born a muggle doesn't mean that you have to stay one! We figured that as long as you’re going to venture into the wizarding world, you may as well go all-in and become the most famous wizard of all time. Just imagine it, you can be sitting in the great hall at the Gryffindor table next to Ron and Hermione faster than you can say “Expelliarmus!” and without so much as a peep out of the Sorting Hat. Potter fans the world over would perform an unforgivable curse just to get their hands on this magical costume, and now it’s yours. Can you even believe it? Maybe the costume chooses the wizard.Fun DetailsWhile it doesn’t include an invisibility cloak, this ensemble does provide you with Harry’s Hogwarts hooded robe with the Gryffindor emblem and colors. You can pick up a pair of round glasses, a Gryffindor tie, and draw on a scar tattoo and—bam!—you are a muggle no more! Unfortunately, once you’re wearing this, you’re no longer safe from the steely gaze of Snape or the dangerous grasp of the Dark Lord. But in this robe, you can join Dumbledore’s Army and fight right back! So that seems like a cool trade-off to us!Send Us an Owl!Of course, we haven't been able to include Harry's flying skills, bravery, or freakish luck, but that's what you're going to Hogwarts to learn! At the very least you can learn how to whip up a draught of Felix Felicis!