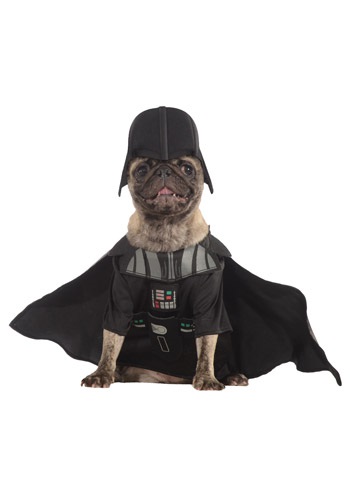 If only he knew the power of the Dark Side!Have you ever considered the greatness that your pup could potentially achieve once he accepts his role within the Dark Side of the Force. Your dog can become the unquestioned enforcer of your entire neighborhood, or even the whole darn galaxy. You just need the right kind of outfit to help him achieve his destiny. That’s where this pet Darth Vader costume comes into play.Based on the infamous villain from the Star Wars films, your little doggie will feel the full power of the Dark Side! It comes with a black shirt with printed armor, along with a matching black cape. It also comes with a headpiece that looks like Darth Vader’s signature helmet. Once your pooch has it on, you’ll be ready to play the role of Emperor Palpatine, giving him commands to follow! Start with something like, “Fetch Luke Skywalker for me!”

Here are some other products related to Pet Darth Vader Costume