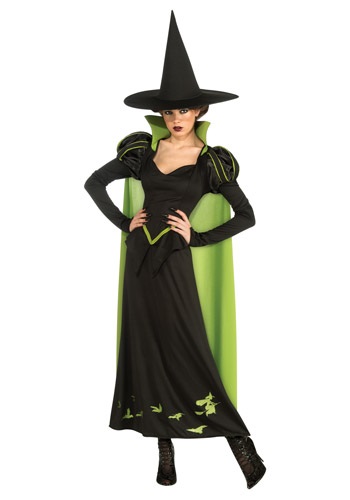 Wicked Witch of the West Costume For Adults - RU887379

WICKED WITCH OF THE WESTWe feel like the Wicked Witch of the West never really had a fair chance. Just think about her name. She's the Witch of the West, so she needs to pick an adjective that will describe her that starts with a W... You might be able to see the problem; there are hardly any good adjectives to pick from if she wants a good name!She could be the Wise Witch of the West, but she'd sound kind of full of herself... She could be the Wonderful Witch of the West, but something about that just feels off. No, we don't blame her for choosing Wicked. The only problem with it is that now she has to be evil! Unfortunately for the people of Oz, this is largely at their expense. And Dorothy's, of course. Still, she chose the best name available. She did her best. FUN DETAILS This costume will turn you into a super stylish Wicked Witch of the West! You'll be wearing a long black dress with a green foam collar. The dress has puffy shoulders with green trim that matches beautifully with the trim around the waist and the cape. The cape comes attached to the dress and gives this costume a dramatic flair. The dress even has detailing on the bottom that depicts a witch and flying monkeys, giving this costume a little extra style. Last but not least, we've included the hat; the hat is a classic witch's hat that comes in all black. WICKEDWhen you go out in your costume, will you be every bit as wicked as your name suggests? It couldn't hurt to mix a little bit of kindness in too! As long as people don't start trying to call you The Nice Witch of the West, you should be okay!