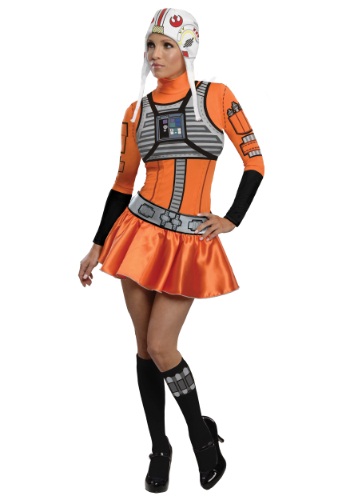 Hey hey. It's time to step up. To do your duty. To save the galaxy! You are, after all, a crack pilot. So, there's only one thing you should get busy with. It's time to join THE REBELLION and do your part! You'll see the galaxy, and you'll probably do some work on plenty of Imperial ships too. Yup, the Rebels could really use an ace pilot just like you!Of course, you're going to want to hop into the cockpit of a T-65 X-Wing Fighter, and you're going to want to get your flight gear just right, too. We have the perfect selection! Just take a look at this sleek Women's X-Wing Pilot Dress Costume! An updated, and female friendly version of the classic flightsuit worn by Rebel pilots, you'll have no trouble fitting in with your flight squadron. And you're probably going to be the best dressed member of your rabble!This dress is Star Wars officially licensed. It's fully printed with lots of details, and it has a metallic skirt for some added cute factor. It also comes with a printed belt, hat, and stockings. Everything you need to become a real deal X-Wing pilot! We're sure you're going to do great in the Rebellion. Remember to keep your eyes peeled for exhaust ports to target on those enemy ships!