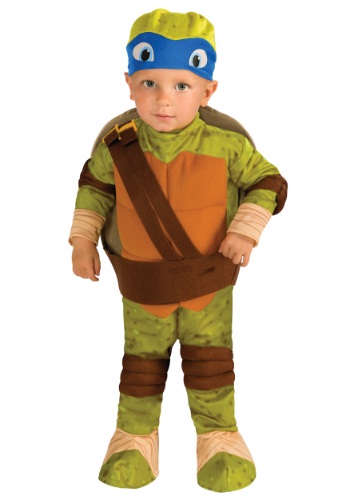 Ever since their first breakout comic published in 1984, the Teenage Mutant Ninja Turtles have been a cultural phenomenon. They’ve had multiple generations of comics (even teaming up with Batman once), several cartoon and movie franchises, and they even performed rock and roll live during their Coming Out of Their Shells tour, performing at prestigious venues including Larry King Live, the Oprah Winfrey Show, and even Burlington, Vermont (we know -- we were there). To this day we can’t even say the word “pizza” without immediately thinking of the iconic reptilian martial arts team. There’s a turtle for everyone. Love to party? You’re a Michaelangelo. Rude, but crude? That makes you a Raph man. Good with machines? You know that makes you a Donatello! But if you’re a staid, disciplined leader, a brilliant tactician, and a masterful swordsman, then you’re a Leonardo in the making. (We suppose if you’re a giant rat that makes you a Splinter, too.) If your toddler is growing up right, then they’re probably already a big fan of the Turtles and loves their fearless leader. Do them right with our officially licensed TMNT Leonardo Costume for Toddlers, a jumpsuit, shell, and headpiece that will transform them into everyone’s favorite cold blooded ninja. And if you know kids, you know that toy swords are always a hit and any excuse to carry one is welcome. This costume is sure to put a smile on their face!

Here are some other products related to TMNT Leonardo Toddler Costume