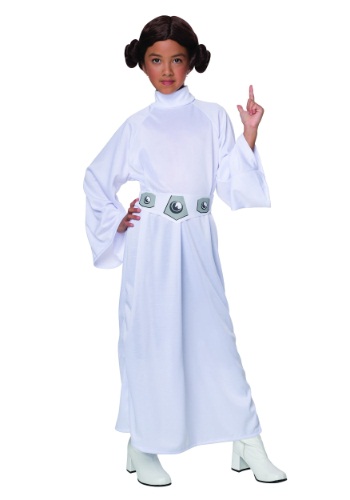 Your little princess is a true boss, are we right? When her math teacher, mean old Mr. Tarkin, said he wasn’t going to curve the last test that everyone failed, she fought him on it till he backed down. And when you said she was grounded, well, she just snuck out of her room anyway. Remember that one time she couldn’t go sleep over at her friend Mon Mothma’s house? Well, we don’t think you’re going to repeat that disaster.What we’re saying is, we think she’s earned the privilege of wearing the outfit of the original Princess-in-Charge: Leia Organa, of course! With this Child Princess Leia Costume, your little royal one will feel confident enough to take on the whole Empire herself. Just don’t be surprised if you find her trying to smuggle two protocol droids from her room to an undisclosed location, or witness her putting that scruffy young rogue from down the street in his place when he acts foolishly. Don’t worry, in this costume, she’ll always be acting in the best interest of those she loves and in the name of good--which is a pretty great ally to have. And it doesn’t hurt that she has yet to fail at anything she sets her mind to.This costume may give everyone a...dare we say,it? A new hope...even if you see Darth Vader and a legion of Stormtroopers marching down your humble cul-de-sac. Now pick this costume up and let your little Princess become the General she’s destined to be!

Here are some other products related to Child Princess Leia Costume