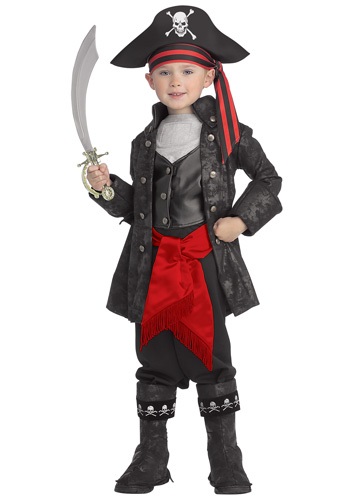 PIRATES Has your kid been acting a little unruly? Maybe they have taken to the pirate lifestyle and abandoned the ways of our civilization. Are they talking like a scallywag, and taking what they want? Do they ignore authority? When a child gets it into their head that authority doesn't matter, well, that can be pretty hard to fix. But, we have come up with a way to get through to them.If they want to be a pirate, let them be a pirate. But, tell them that YOU are the captain. When you are the captain, you'll have all the control! As long as they don't pose a mutiny, of course. But, if you can't stop a toddler's mutiny, then you might not be fit to be captain anyway. Once they have accepted you as their captain, then you can teach them the pirate code: (etiquette and house rules). As soon as they start following your revised version of the pirate code, you'll find they are behaving much better! FUN DETAILS This costume will turn your child into a fierce pirate! They'll be wearing a black jacket with silver buttons and faux pockets The pants match perfectly, as do the boot covers. Under the jacket, they'll be wearing the vinyl vest. It actually comes attached to the jacket, making this costume easy to put on and take off! As final touches, we've included the red waist sash and the foam pirate hat with the bandana attached. All they'll need now is a plastic sword and their costume will be complete. A PIRATE'S LIFE FOR MEOnce they see all the rules in the pirate's code, your child might lose interest in being a pirate. But, that's okay! Then they can just go back to being a normal citizen in our civilization, there days of piracy behind them.