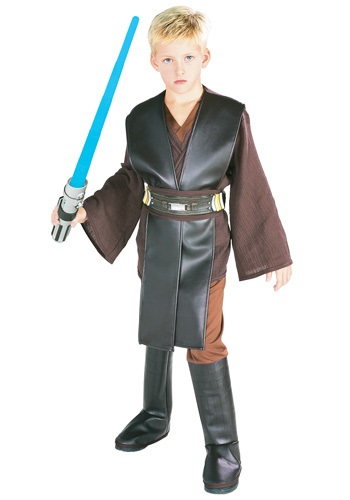 Jedi time! That's right, it's time for him to hop into the action from the galaxy far, far away. He's going to need to stop at the Jedi temple, because everyone just found out that he's force sensitive. And spoiler alert, he's really excited about it! Sure, he's ready to grab a lightsaber and do his part to battle the evil Sith, but first, he's going to have to take care of his training. Well, the first step in any journey is to get dressed, and we think he better be dressing like a Jedi for this appointment!You don't have to look very far when choosing a Jedi Padawan costume style, we just recommend wearing the same threads that Anakin Skywalker wore! Sure, he ended up becoming Darth Vader, but that's no reason your kid shouldn't borrow Ani's supreme style sense. This costume replicates his style to a tee. His Jedi robes are a little darker than most, and he's got cool black sashes add to his own unique style. Complete this costume set with a lightsaber, sold separately, and your kiddo will be ready for his first day of Padawan training. This is gonna be FUN!