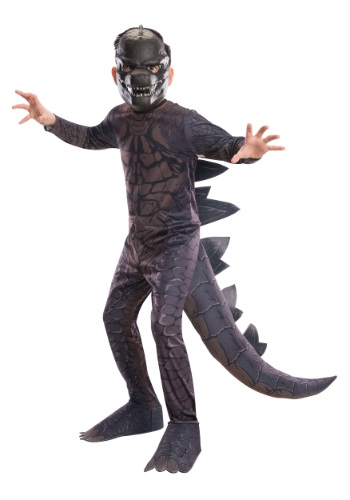 A City DestroyerWe know it’s a little bit of an unusual habit, but you love to collect and build those great builder’s blocks. It’s not unheard of—and it’s a good use of that engineering degree. You’ve been doing it since you were a kid, and sometimes, you can spend entire afternoons putting together complicated cities in your basement. Too bad that’s not going to stop your kiddo’s ambitions to bring it all down to rubble. We can’t say why they’re so driven to bring your work to ruin, but if they’re going to try, then you should at least get them this Child Godzilla Costume so they at least look the part while doing it!You may see tiny toy bricks and the fruit of all of your architectural efforts crumbling around you, but at least your kid will be having a great time! And just like the real monster of Japanese origin, they won’t stop until everything is in pieces!Fun DetailsThis monstrous look is sure to complement the destructive play your little one can get into. The jumpsuit fastens at the back, and the sewn-in shoe covers have elastic bands under each foot, so they stay put under your kiddo’s rampaging feet. The tail can be stuffed with tissue or fiberfill and is attachable or detachable from the jumpsuit with safety pins. Finally, to complete the look, the foam mask secures around the head with an elastic security band. Look out! This look is as endearing as it is destructive!A Face-OffWe’re not saying you should dress as Mothra, or King Kong, and try to battle your child away from your masterpiece of a city—but it might be a lot of fun! Afterall, the only way to stop a giant, city-destroying monster, is to become a giant, city-destroying monster to match. We know these things.

Here are some other products related to Kids Godzilla Costume