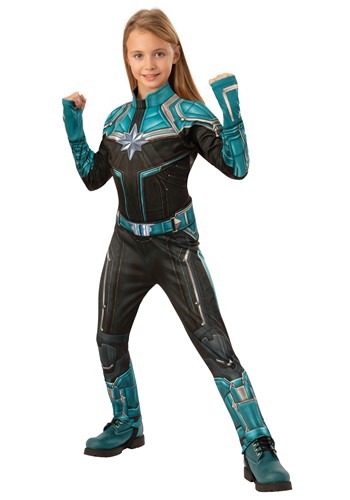 GIRL, WHY YOU ACKIN’ SO KREE-KREE?Carol Danvers is a Kree... sort of. Or at least, she’s a half-human, half-Kree hybrid (it's complicated). That means that she has the compassion and passionate disposition of human, but she also has the stellar superpowers of a full-blooded Kree. It’s the best of both worlds and it’s why she acts a little Kree-Kree sometimes! It’s also what landed her a position on the famous team led by Star Commander, known as Star Force.  Does your girl want a spot on the Star Force team? Does she want to fight against evil villains in the universe? Does she want to act a little bit Kree-Kree? Well, then she’s going to want a costume that transforms her into Captain Marvel!FUN DETAILSThis child Captain Marvel Kree costume does a great job of recreating Carol Danvers Starforce outfit from the movie. It comes with a black jumpsuit that has plenty of printed details on the front to simulate the look of an armored flight suit. The shoulders, printed belt, parts of the sleeves, and the pants have teal accents. It also features silver accents on the sleeves, chest, and pant legs, and the chest even has a silver star on it. The sleeves end in attached fingerless gloves and the legs feature elastic bands to fit around your child’s shoes. The finishing touch to this outfit is the mask, which fits with an elastic band and faithfully recreates the look from the Captain Marvel movie.THANOS, WATCH OUT!If your child dreams of being a half-Kree superhero, then it’s time to get her the outfit to match! This costume acts as a great way for your girl to play as the iconic Marvel superhero and will help her feel like the powerful savior of the universe! She might even be ready to take on Thanos himself.