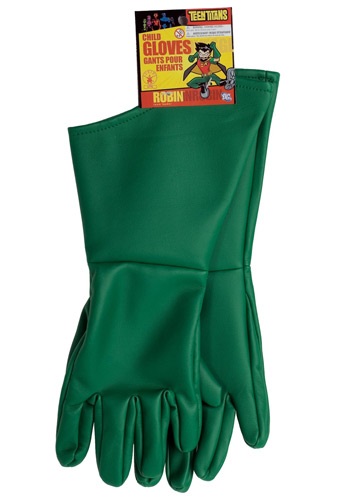 Da da da da Robin! Okay, you can see what we did there. You probably thought we were going to say Batman. That's kinda how the song goes. But, when it comes to costuming up, we think Robin's a sidekick who doesn't play second fiddle to anyone. And that's why we highly encourage your child to dress up as the Boy Wonder. And after you've picked out his style, make sure he has the complete look when you add these Kid's Green Robin Gloves to the ensemble!These gloves come from Rubies Costume Company, and they're designed to match the Rubies Teen Titans Robin Costume. All vinyl, these gloves come in the perfect shade of green, and they're cut just like Robin's costume gloves in the animated series. When you get them for your kid, they can live out the action of their favorite show Teen Titans Go, or take part in any kind of Batman and Robin adventure!

Here are some other products related to Kids Green Robin Gloves