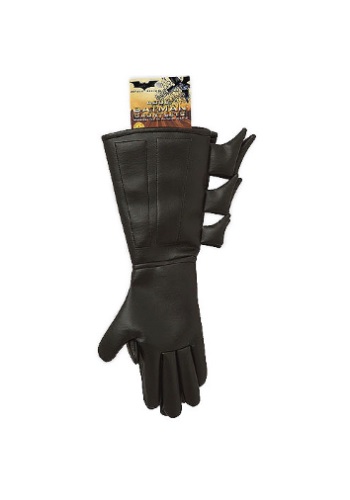 How often do you think The Joker takes a bath? What’s it like to punch Clayface with your bare hands? Do you think Solomon Grundy smells funky?Well, the point is that Batman fights a lot of unsavory figures that probably aren’t the cleanest characters. And your kid has been begging you to dress up like Batman, hasn’t he? Then you should probably get him a pair of gloves so he doesn’t have to trade blows with those dirty villains with his bare hands. These child Batman gloves are just the kind of item for the job!They’re based on the ones used by Batman in the Dark Knight Trilogy, so your little one can complete their Caped Crusader costume with ease. They are made of a polyester, faux leather material that has spikes on the side for an intimidating look. Just slip them on your child’s hands and he’ll be ready to tangle with any foe completely worry free!

Here are some other products related to Childs Superhero Batman Gloves