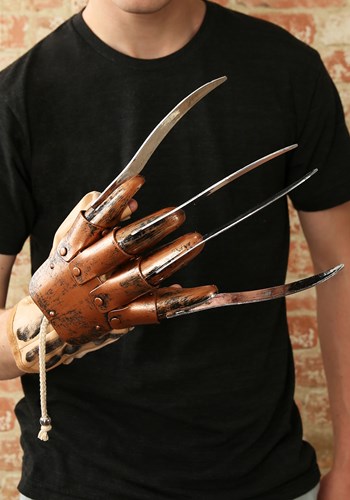 We’ve got to hand it to Freddy Krueger: the guy sure knows how to accessorize.He’s not your average run-of-the-mill slasher villain. Those guys are so dull! They all look the same: a hulking, faceless killer, hiding behind a mask and waving a machete in the air. Sure, they can get the job done, but where’s the style? The grace? The love of life? Is it really enjoyable to watch them hunt down ditzy teenagers too dumb to avoid haunted campgrounds and “Do Not Enter” signs? They’re pitifully predictable and, honestly, boring.But Freddy… now, this guy has a presence. He doesn’t just stab you through the heart and call it a day; every kill is painstakingly and lovingly crafted for each individual target. He tends to work in the dream world, to terrifying and impressive effect, but he’s just as deadly when he’s pulled into the real world. And it’s mostly due to his scary-good accessories.Case in point: Freddy’s razor-sharp glove. No Freddy costume is complete without this Freddy Krueger Glove. It's a brown fabric glove with silver plastic blades attached to the fingertips, and it looks just like the one Freddy wore in all his movies. Armed with this special glove, you'll sure look sharp!

Here are some other products related to Freddy Krueger Glove