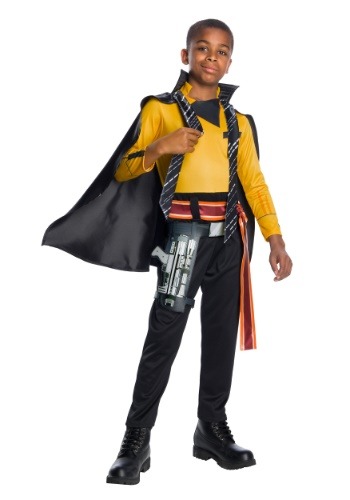 The It FactorYour child has it. You know, that indescribable it factor. It’s not something that’s easy to explain. He’s charming. He’s bold. He’s a dapper dresser and he’s a smooth talker. He’s shaping up to be a little Lando Calrissian, isn’t he?Well, the good news is that the debonair character from Solo: A Star Wars Story is quite the success! Played by Donald Glover in the movie, he owns the greatest ship in the galaxy, the Millennium Falcon. His best pal is a wacky droid. He’s practically undefeated in Sabaac. He also knows the low-down on just about everything going on in the galaxy. Later on in his career, he gains ownership over an entire city. If your child’s aim is to be like Lando, then he might just follow the same successful path. Now, this child Lando Calrissian costume might not guarantee the same kind of success, but it will at least have your little one dressed for success!Fun DetailsThis costume for kids is based on the outfit seen in Solo: A Star Wars Story. The costume comes with a simple jumpsuit that’s easy to put on. The top recreates the look of Lando’s yellow shirt, while the bottoms look like a pair of black dress pants. The included scarf gives your child a dash of chic fashion that will set him apart from the other smugglers in the galaxy. The costume also comes with a cape, since we all know how much Lando loves wearing his capes! Finally, the waist sash and belt tie the whole look together, ensuring that your child will look his best while he chases success in the galaxy.An Adventure for TwoYour child can head out into the galaxy as one confident smuggler when he wears this Lando Calrissian costume. You can even join him when you check out our full selection of Star Wars costumes for adults!