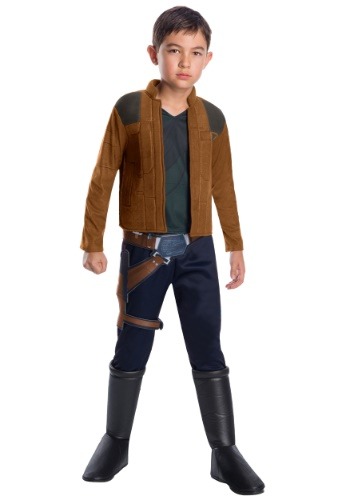 The Perfect Kid for the HeistIt's finally time for the heist. It's dangerous. You want to make sure that it's a success. You're going to need one smooth operator on your team. You're going to need someone with a lot of guts. You're going to need someone who can pilot a ship. You're going to need someone who has nerves of steel and the quick wit of a true scoundrel. Also, a Wookiee for a best pal doesn't hurt either! You're going to need Han Solo!... unfortunately, that guy is difficult to track down. We've scoured Tatooine, Corellia, and even Bespin—we still haven't been able to find him! Maybe your child can fill in for him. After all, your child has some guts. He can't pilot a ship, but he's pretty good at riding his bike and you can always dress up like Chewbacca yourself to make sure he was a Wookiee for a best friend! All you really need is this Han Solo costume for kids!Fun DetailsThis officially licensed Star Wars costume for kids helps turn your child into the scrappiest smuggler in the entire galaxy! This costume comes with a top that has an attached brown jacket, which looks like the one worn by Aiden Ehrenreich from Solo: A Star Wars Story. The included pants that attached foam boot covers, so your child can wear their favorite pair of shoes with the outfit. Finally, the belt has an attached holster that fits around your child's leg. They all combine for a look that will have your child ready to take on any heist mission. Han Solo and ChewbaccaOnce your child is all dressed up in this Han Solo costume, he'll be ready to join you on a Star Wars adventure! It also gives you the perfect excuse to dress up like Chewbacca, so you can join your young one on the next galactic adventure.