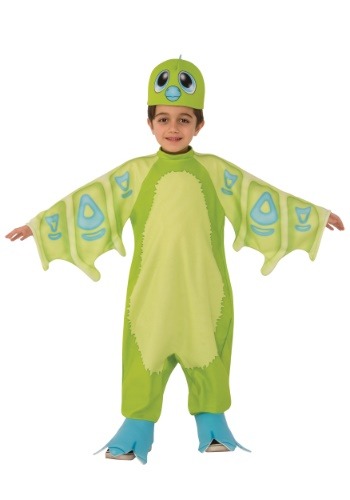 Kids growing up in today's world are open-minded, tolerant, and brimming with questions. They want to know why the sky is blue and the grass is green and why there isn't an animal that's a cross between a dragon and an eagle. Of course, as a parent, you want to tell them all the right answers but you don't want to squash any dreams of theirs that might be forming in their constant-developing brains. So what should you tell them as a parent? Our advice is to tell them that anything is possible (because it totally is) then show them that anything is possible by gifting them with this Hatchimals costume. See honey, anything is achievable because a cross between a dragon and an eagle does in fact exist, and it's called a Draggle and here's the costume that proves it. Not only will you be encouraging your son or daughter to reach for the sky in everything they do, you'll also give them the opportunity to look like a really awesome hybrid animal/the It toy of the moment, a Hatchimal.The costume comes with the jumpsuit and the headpiece which is everything your child needs for his or her transformation. The jumpsuit features an all-over printed design and fastens together via a hook and loop closure in back. The arms are designed to look like wings while the legs of the jumpsuit have attached shoe covers giving the appearance of webbed eagle feet. The character headpiece finishes off the complete costume and adds an extra dose of cute. Your little one will feel like they could do anything while they're wearing this costume, which is exactly the point/

Here are some other products related to Toddler Hatchimals Draggles Costume