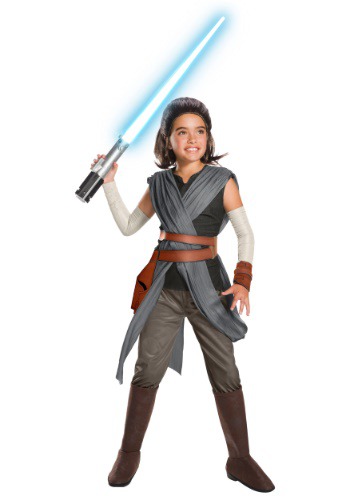 Here’s a quick list of the ten five reasons for your kid to dress up as Rey this year:She’ll look cool when she plays with lightsaber toys.You get to play with the lightsaber toy when she’s all done with it.Stormtroopers will be unable to hit her with a blaster, since she’ll be a major character with invisible “plot armor”.It’s way better than dressing her up in a sheet with holes in it.She’ll get way more candy from Star Wars fans if she wears it to trick or treat.It gives you a legitimate reason to wear Luke Skywalker costume.It gives you a legitimate reason to wear a Chewabacca costume.It lets her roleplay as a strong female role model.She might realize her destiny to become the hero that the galaxy needs.She’ll be cuter than a Porg when she dresses up like Rey.Yeah, it’s about time that you grabbed this child Rey costume, which is officially licensed from The Last Jedi. It comes with a top that has attached wraps across the front. It also comes with matching pants with attached boot covers for a look straight from the movie. The arm warmers, cuff and belt will put the finishing touch to the outfit, which will have your little Jedi in training ready to take on any baddie the galaxy might send your way. Just make sure to grab a lightsaber accessory so you can start her training the right way!