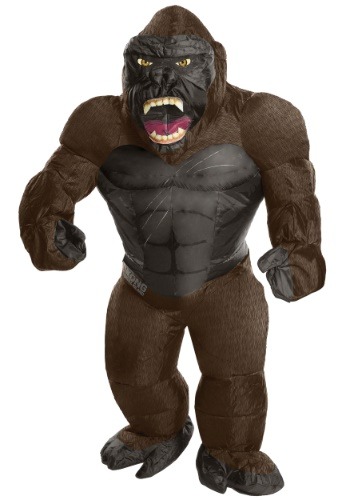 We'd like to let you know that there's a new monster on the Halloween scene. He's large. In charge. And made of polyester. Yeah, he's the Inflatable King Kong! Just like Kong in Kong Skull Island, this beast is ready to defend himself, and he's probably ready to battle some Skull Crawlers too. The only question is, who's willing to step into the suit?We hope your kid is, because when he chooses this costume, he gets to be the coolest version of King Kong ever! This costume is officially licensed from the 2017 flick Kong Skull Island, and is fully printed to depict his large and in charge style. It even has a movie logo printed on the waist so it's 100 percent official! It features a mesh eye portion so the wearer can see out of the costume, and all together, this costume is sure to be a huge hit.This costume uses a battery pack that secures to the waist or fits into a pocket, and it's powered with 4 AA batteries (not included). The battery pack powers the fan that's integrated into the costume. Warner Bros. officially licensed, get your kid this costume to let him go all Kong!