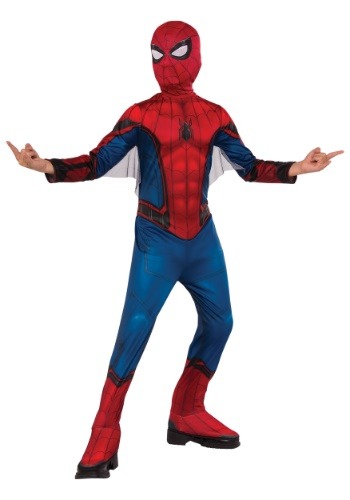 If you think about it, your child is practically Spider-Man already. Maybe he didn’t get bitten by some kind of radioactive spider, but he already has boundless energy, which he uses to jump around the house like some kind of superhero. He also has some pretty solid crawling skills, which Spidey is well-known for. He’s probably even tried using said crawling skills to climb the wall on occasion! Well, maybe it’s time to put those skills to good use! You can dress him up like the iconic Marvel superhero when you get this child Spider-Man costume.The costume is licensed from the Spider-Man: Homecoming film and it comes with a jumpsuit and mask to help transform your kid. The jumpsuit has the classic red and blue color scheme, complete with printed web detailing and the Spider-Symbol on the front. It also has muscle shading on the front to help make your child look like one buff and tough superhero. The legs also have some foam boot covers attached to the bottoms, so your child can wear this costume with any shoes. And, of course, he can’t be Spider-Man without his mask! The mask has large white mesh eyes and it fits with velcro in the back.The costume might not actually give your child super-strength and it might not actually let him shoot webs from his wrists, but it will make his constant bouncing around look much more heroic! Make sure to take a few pics of him and you might even be able to sell the pics to the Daily Bugle.